Get a Free Demo

Reliability Growth, formerly known as RGA software, is an advanced module application available in ReliaSoft Weibull++ that allows you to apply reliability growth models to analyze data from both developmental testing and fielded repairable systems. During the development phase, it allows you to quantify and track the system’s reliability growth across multiple test phases, while also providing advanced methods for reliability growth projections, planning and management. For systems operating in the field, you can calculate optimum overhaul times and other results without the detailed data sets. 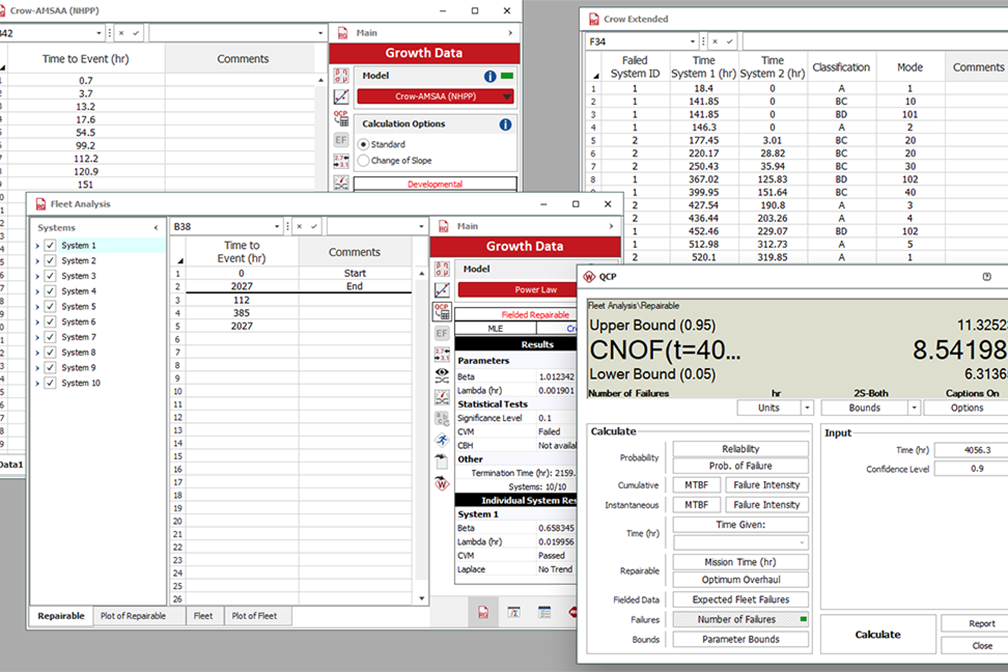 Predict failures before they occur

Determine the feasibility of achieving a target MTBF with a given management testing strategy. Evaluate the reliability improvement from rolling out fixes for a fleet of units operating in the field.

Easily determine the amount of testing required to demonstrate a specified MTBF, failure intensity, or reliability without the detailed data sets that would normally be required for repairable system analysis.

Determine the test time required per system in order to demonstrate a specified reliability goal.

Automatically analyze and plot results from a large number of data sets that have been created via simulation. Perform a wide variety of reliability tasks with integrated simulation tools. 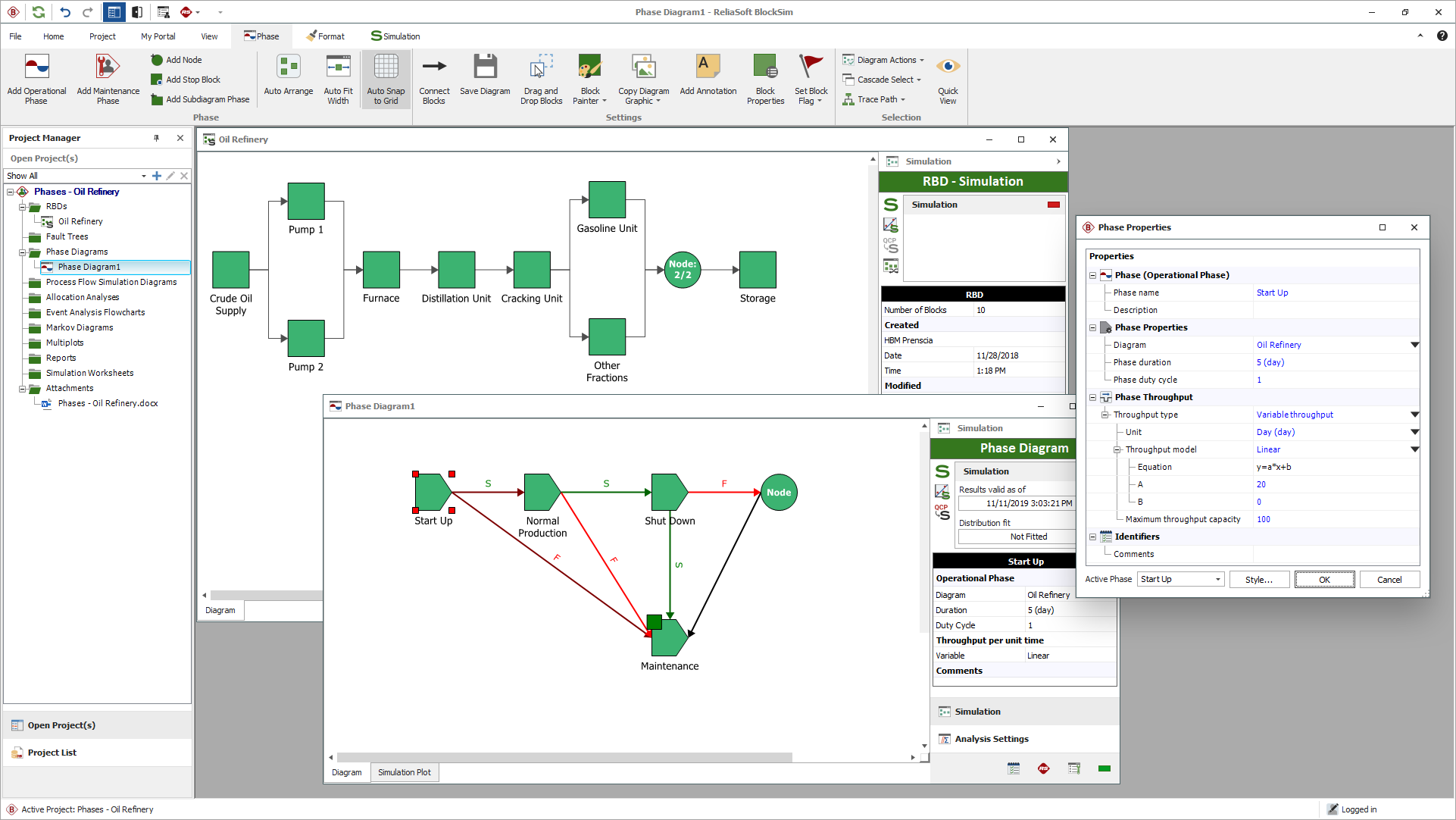 The Reliability Growth module facilitates the analysis of repairable systems data using the Crow (AMSAA) model. It allows you to get an overview of the system without having the large data requirements that would normally be required for system reliability analysis.

With the Reliability Growth module, you can track the progress of the system during development phase and then use ReliaSoft BlockSim in accordance with the already known results to gain more detailed information. 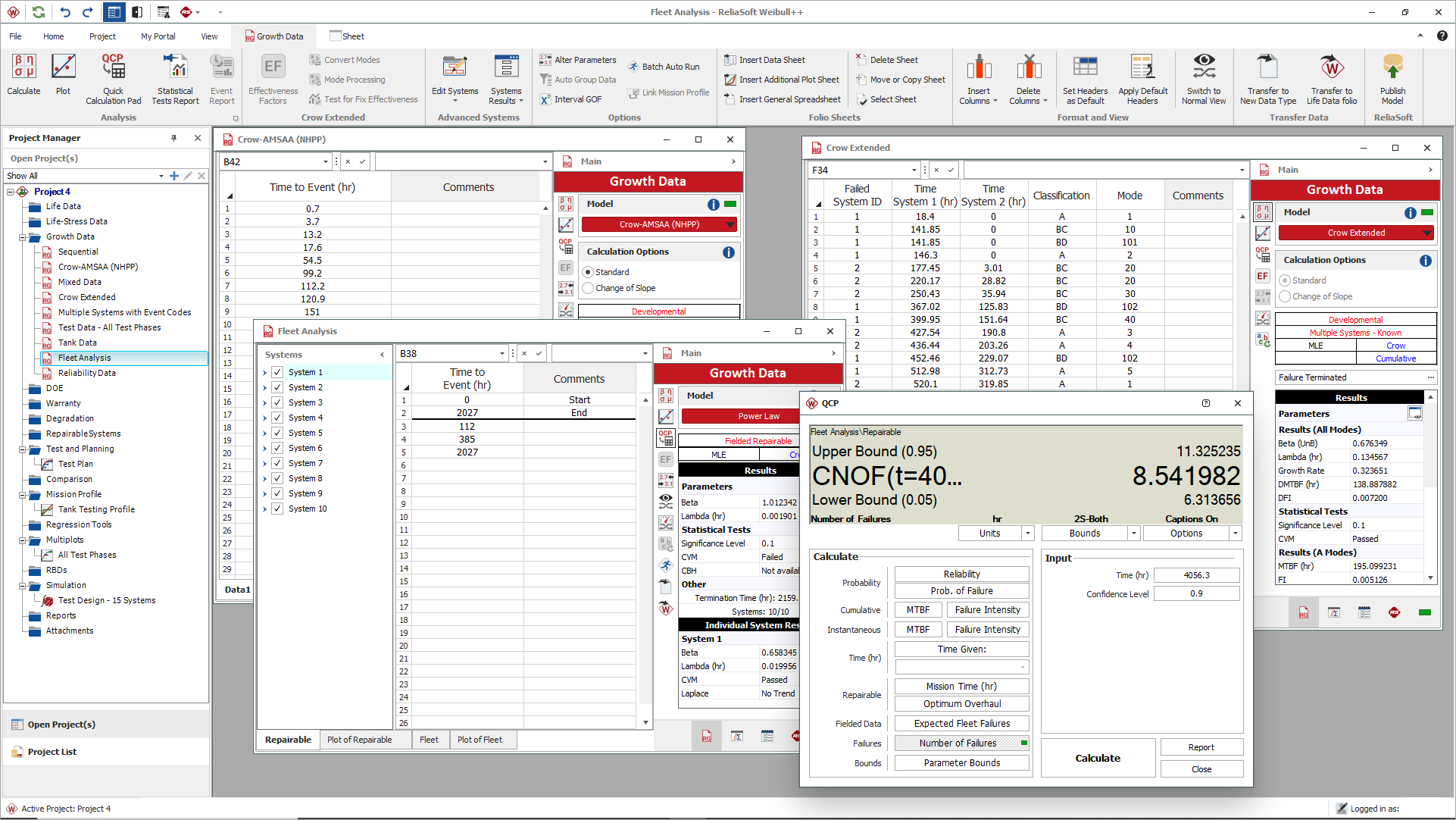 Reliability growth data types
Times-to-failure data
When you have data from developmental testing in which the systems were operated continuously until failure, you can use the Crow-AMSAA (NHPP) or Duane models. The module provides a choice of data types for individual or grouped failure times, and for combining data from multiple identical systems. This can include situations, where all systems operate concurrently, you have recorded the exact operating times for both the failed and non-failed systems or you have recorded the calendar date for each failure so you can estimate the operating times of the non-failed systems based on the average daily usage rate for the relevant time period.
With the Crow-AMSAA (NHPP) model, there are additional analysis options for certain situations, such as Gap analysis (if you believe that some portion of the data is erroneous or missing) or change of slope (if a major change in the system design or operational environment has caused a significant change in the failure intensity observed during testing).

Discrete data (also called attribute, one-shot or success/failure data)
When you have data from one-shot (pass/fail) reliability growth tests (and depending on the data type), the module supports mixed data models that can be used with Crow Extended and Crow Extended-Continuous Evaluation models. For discrete data, there is a choice of data types that can handle tests in which a single trial is performed for each design configuration, multiple trials per configuration, or a combination of both. The module also supports Failure Discounting, if you have recorded the specific failure modes from sequential one-shot tests.

Reliability data
When you simply wish to analyze the calculated reliability values for different times/stages within developmental testing, you can use the Standard Gompertz, Modified Gompertz, Lloyd-Lipow or Logistic models.
Reliability Growth projections, planning and management
Reliability Growth module supports several innovative approaches that expand upon traditional reliability growth methods in ways that better represent real-world testing practices and practical applications.
Reliability growth analysis results, plots and reports
For traditional reliability growth analysis, you can calculate the MTBF, failure intensity or reliability for a given time/stage. You can determine the amount of testing that will be required to demonstrate a specified MTBF, failure intensity or reliability. Additionally, you can estimate the expected number of failures for a given time/stage. The module makes it easy to create a complete array of plots and charts to present your analysis graphically.
Failure mode classifications and effectiveness factors
Although traditional reliability growth analysis requires the assumption that all design improvements are incorporated before the end of the test (test-fix-test), many real-world testing scenarios may also include some failure modes that are not fixed, and others where some or all of the fixes are delayed until a later time (test-fix-find-test or test-find-test). With the Crow Extended and Crow Extended – Continuous Evaluation models, you can use Failure Mode Classifications to provide the appropriate analysis treatment for any of these management strategies. For delayed fixes, both models use Effectiveness Factors to indicate how much the failure intensity of each mode will be reduced once the fix has been implemented.
Fielded repairable system analysis
The Reliability Growth module provides opportunities for fielded repairable system analysis. Repairable systems analysis to analyze data from repairable systems operating in the field under typical customer usage conditions. Such data might be obtained from a warranty system, repair depot, operational testing, etc. Specifically, you can use the Power Law or Crow-AMSAA (NHPP) models for repairable system analysis based on the assumption of minimal repair (i.e., the system is “as bad as old” after each repair) to calculate a variety of useful metrics, including:

You can also use the Crow Extended model for fielded repairable systems if you want to evaluate the improvement (i.e., the jump in MTBF) that could be achieved by rolling out a set of fixes for all systems operating in the field.

Reliability test design for repairable systems uses the NHPP model to determine the test time required per system (or the number of systems that must be tested) in order to demonstrate a specified reliability goal, defined in terms of MTBF or failure intensity at a given time.

Operational mission profiles to make sure that the testing is applied in a balanced manner that will yield data suitable for reliability growth analysis. Mission Profile folios can help you to create an operational test plan, track the expected vs. actual usage for all mission profiles and verify that the testing has been conducted. It helps you automatically group the data at specified “convergence points” so the growth model can be applied appropriately.
Monte Carlo simulation
Create data sets that can be analyzed directly in one of the Reliability Growth’s standard folios. You can also use the SimuMatic® utility to automatically analyze and plot results from a large number of data sets that have been created via simulation. These integrated simulation tools can be used to perform a wide variety of reliability tasks, such as:

The availability and performance of operating systems and assets represent the two major contributors to profitability of the business. Creating and sustaining value requires the evolution of the organization culture from corrective maintenance (fix it when it breaks) to a reliability based maintenance where all the organization departments contribute and share a common vision. It is a value chain reliability approach.

The immensely popular G400 course sets the foundation for all subsequent seminars by introducing and familiarizing the attendee to the fundamental concepts in reliability engineering mathematics, from basic data analysis and modeling to advanced methods and concepts. It begins with an in-depth discussion of the fundamentals of Weibull and Life Data Analysis and continues by expanding the learned concepts to more advanced subjects. 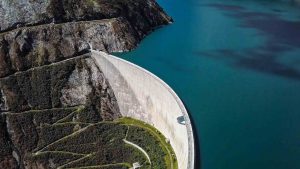 MIL-217, Bellcore/Telcordia and Other Reliability Prediction Methods for Electronic Products

Since 2009, we never hesitated to request REC to provide us with RCA, Reliability & Safety trainings because we always get positive feedback from our attendees. All REC trainers are very-well knowledgeable of our process, plants, and procedures.

REC is very responsible, goal-oriented, and very-organized when it comes to customer service. We have completed an RCA investigation on a failed equipment with their electrical expert, and received a well-written and valuable RCA report. Now we are considering to enhance the culture of RCA in the organization with REC.

A complete Reliability & HAZOP programs that consist of software, training & case studies were delivered during COVID-19 pandemic periods. REC were careful and thoughtful to accept the challenges, and they never disappoint us.

A complete Reliability & HAZOP programs that consist of software, training & case studies were delivered during COVID-19 pandemic periods. REC were careful and thoughtful to accept the challenges, and they never disappoint us.

We had so many maintenance activities, but after utilizing RCM++, and improved the maintenance management systems.

RCA training was one of the best training we took, simply everything was perfect !

We had a class-A incident in one of our plants, and we realized it requires some expertise, so the first company we thought of to facilitate the RCA investigation was REC. They exceeded our expectations !

XFRACAS can easily report us on any safety/reliability incidents occurred to any of our assets.

We decided to go with REC in applying RCM & RBI software and methodologies because of the high ROI and their effective communication.

BlockSim is a user-friendly and powerful RAM software, which assists us in analyzing any system reliability, and can be incorporated with other ReliaSoft software packages.

Get a Free Demo
Request Quote 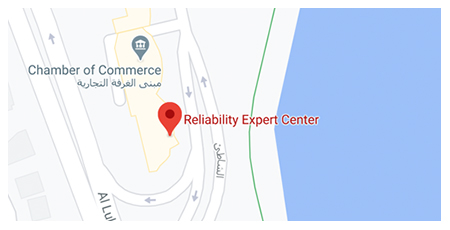 Subscribe to our newsletter below and never miss the latest news from the industry.
Linkedin
Twitter-square
Facebook-square
Youtube-square